Design 9 Inc. is proud of it’s longstanding relationship with its clients and has been fortunate enough to work with countless extremely talented designers and retailers over the years. As a tribute to them we will be featuring one of them each month in new our monthly blog. One client in particular that stands out from the crowd and has made it to the top of our list. David Schaefer of Urban Essentials is a designer /retail store owner that is based out of District Columbia. Urban Essentials was a finalist in the Arts Awards, and was in the running to be named one of the top four retailers in the United States. In addition, Urban Essentials was awarded “Best Lighting” by the Washington City Paper and was featured in the “Best of Washington Furniture Stores” by the Washingtonian.

I recently had the opportunity to sit down with David Schaefer and learn more about his career in retail and design.

How did you get into retail furniture sales and design?

“I originally worked for congress for thirteen years, and after a change of administration, I lost my job. I decided to open a men’s clothing store, but someone told me right before I opened that if I put any clothing on clothing racks it wouldn’t be my property, any fixture on the walls became the property of the landlord, so I decided to put the clothing in and on top of furniture. Eventually, I started selling the desks, tables, chairs, and the things that the clothing pieces were laying on. I sold so much of the furniture that at the end of each weekend the clothes would be on the floor. I ended up selling more furniture than anything. Designing the store is how I got into design because it is all so visual. I learned my way around retail for about three years, and then I partnered with friend and opened a furniture store in DC.”

When did you begin designing and retail?

“In 1997 when I opened the first store, but I had been helping people with their homes and flowers and renovations for almost ten years at that point. I’ve always had a knack for the visual aspect. Then, I met Tricia [of Design 9] the first year I went to market, they didn’t have a permanent show room at the time, so I met her and her husband at their booth. She basically held my hand and helped me place my first order.” 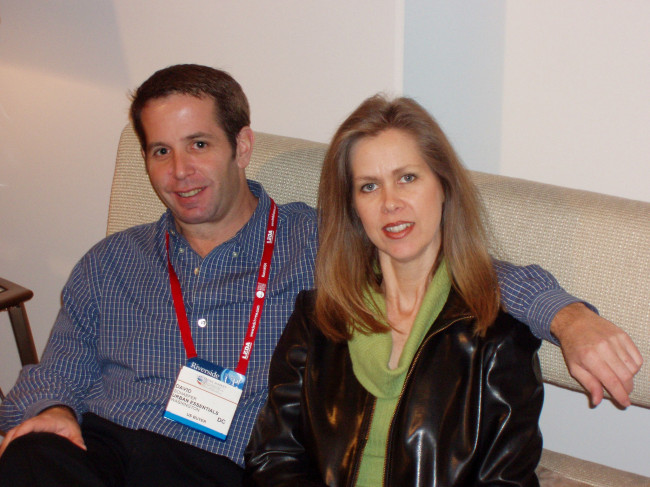 What do you specialize in?

“Currently, we specialize in small scale, upper end, and contemporary furniture. Everything has to be about form and function and ultimately, it has to be of good quality. Most of our clients are moving into 500 sq ft bedrooms, spaces are getting SO small in DC. We have focused mostly on small scale furniture. Anything with dual function is also our specialty.”

Tell us about some of the projects you have worked with us on.

“2501 Penn is one of the most expensive buildings per square foot in Washington. Of the sixteen units in the building, I modeled three. I used 60 different lines of furniture, and pieced together the models, giving each a different feel. Design 9 products played a very important role in each model.”

“In the model where I used the mirrored Reggie sofas, they were ideal. They were very sleek, and I think about 100 inches long. Each unit that we had to model had to have a different feel, this one was more of that clean lines, classic contemporary look, and the sofa fell right into place. I needed one that wasn’t too deep, and the Reggie wasn’t. It had to be long and stream line and I wanted a single cushion so that was ideal. Design 9 also really has the best fabrics there’s no question.” 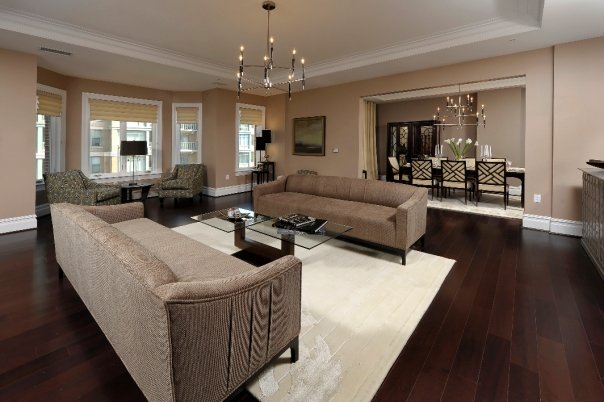 “In the model with the Spencer dining / occasional chairs it was more of a bachelor pad or shared space kind of feel. They are more of a masculine chair; they aren’t little by any means. There was a huge dining room table so the chairs completed the masculine feel that we wanted to give to that model. This is my favorite picture from a project ever- I would move in here, if I could.” 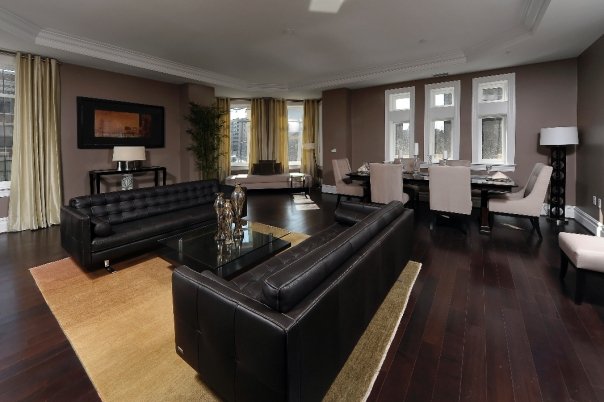 “Then at Rhodes Hill Square in Arlington, VA, I did a project about five years ago. It led to me designing these huge semi-circular sofas. I sent Tricia some photographs and schematics, and hoped for the best. This is a lobby space, and the one thing the builder told me was that he didn’t want the round table in the middle of the lobby with flowers on it- nothing cliche. He wanted it to be open. We had to plan this 40 foot long room and how to furnish it, and how to keep it open. Each space kept becoming so narrow, and I knew I needed a piece to open it. I decided to design my own with Design 9. Each semi circle was two pieces, and they were twenty some feet long.” 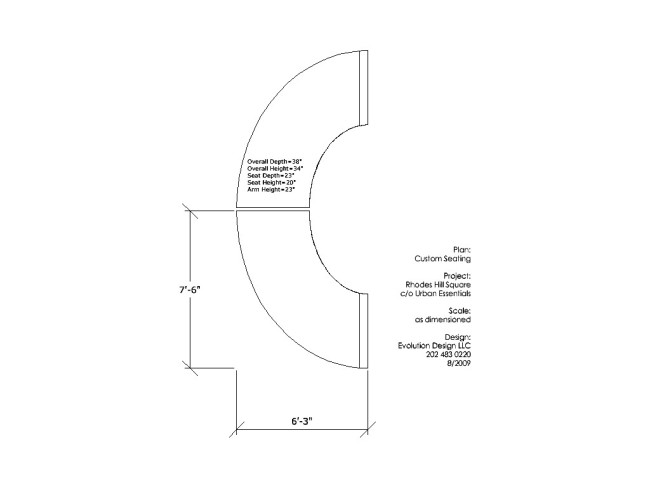 What was it like to see your ideas come to life?

“Nerve wracking, between this custom piece and the huge chandelier above. When you have it on paper, it looks one way, but when you get it in place it doesn’t always look like you have it in your head. When it was exactly what I had envisioned I was thrilled!” 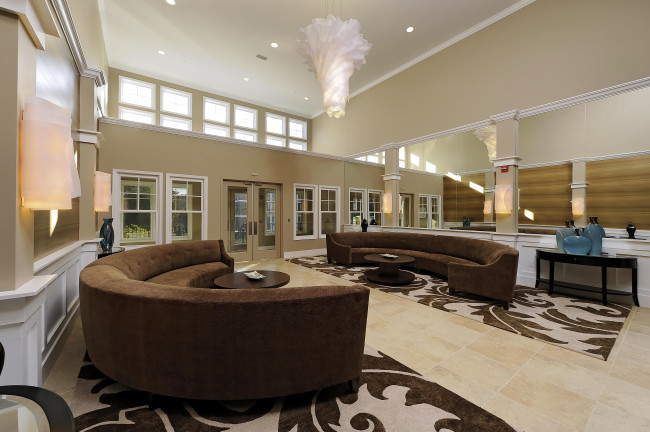 Semi-circular sectionals custom made for Urban Essentials by Design 9 at Rhodes Hill Square in Arlington, VA

On another Urban Essentials project at Rhodes Hill Square…

“Then in a unit model in Rhodes Hill Square, I used the Lilly dining /occasional chairs. The room had an 18ft ceiling so I thought we could use tall pieces, like the Lilly chairs, which I think are beautiful, very sleek, modern, streamline, they look very grand. They are upper tier homes, about a million dollars a piece, and they have to look like a grand palace in the apartments.”On another Urban Essentials project at Rhodes Hill Square… 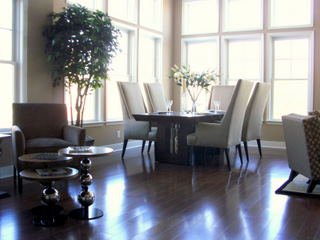 What drew you to work with Design 9?

“When it comes to something I need customized, Design 9 is the first place I call. They have proven they have the ability to do anything. We don’t have a huge need of customization all the time, but in some cases you just have no choice. I mean, you cant find a 20 foot sofa on the market. When I need larger scale pieces- I call Design 9. And Tricia [of Design 9] is so easy to work with. Most places would run away from the idea of a semi-circle sectional and everything that goes into it, its often very hard to explain what you want. Design 9 doesn’t. There was no one else I could’ve called for the Rhodes Hill Square lobby. I also do very well with their dining /occasional chairs: as dining chair they are large and comfortable enough to entertain with and small scale enough to use as living room or bedroom chairs which works well for the small spaces, often times they do double duty.”

Why is it valuable to work with a custom furniture company as a designer or retailer?

“It makes everything easier because they will customize everything, they will work on a deadline, and they will think outside of the box. Most companies will not change dimensions, arm covers, etc. That’s never an issue for Design 9, its all bench made, and they always complete my special requests. The answer is always yes. Some people want what they want at any cost, and that’s where Design 9 comes in.”

In your mind, how did our product accentuate or tie together your entire project?

“Each piece is so different, but I have never had an issue, everything has worked out beautifully. Each time I’ve called upon Design 9 to do something special for us they’ve always hit the mark.”

Overall, what would you say your experience was like in working with Design 9?

“It’s been a pleasure, it’s always been great. I typically go to see Tricia and Mike when I go to market, and it’s always towards the end of the day. We can sit down and chat for hours, about our lives, and what were doing, and I don’t do that with anyone else. Their products are always new, fresh, and they’re always coming up with new ideas.They are great people and very easy to work with.”

I am so thankful that I had the opportunity to sit down with David Schaefer of Urban Essentials and put together our first blog. Design 9, including myself, would like to extend their gratitude to David for being our first featured designer on the blog. Additionally, Design 9 would like to thank David for his loyalty to the line, despite the large market of other choices available. We appreciate and value our longstanding relationships with clients like David. Keep an eye on Design 9 Inc.’s social media and website for more blogs in which our valued designers and retailers will be featured.
-Jordan Boles
Director of Marketing
jordan@design9inc.com

If you would like your installation or projects in which you’ve used our products to be featured please send information to Jordan Boles at jordan@design9inc.com.